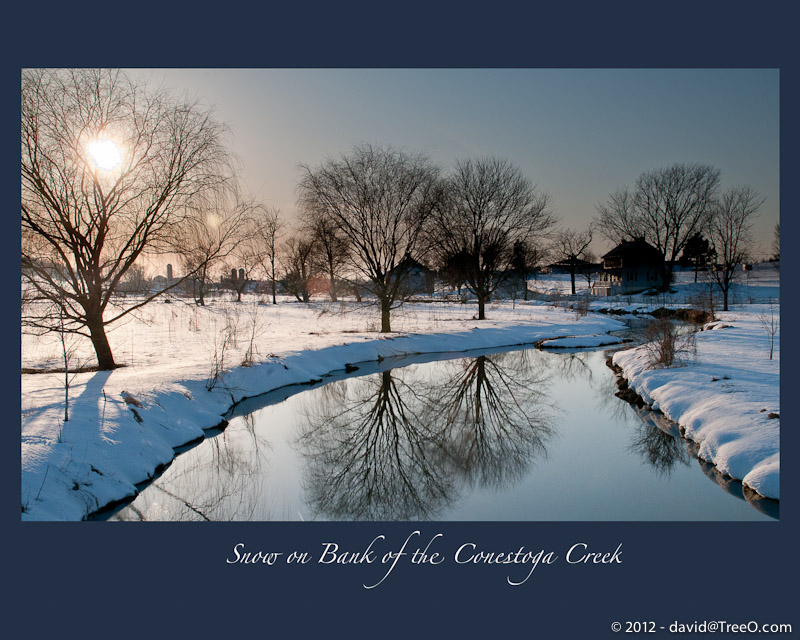 Snow on Bank of the Conestoga Creek - Morgantown, Pennsylvania - February 21, 2010

It was eleven years ago today, February 21, 2010, a beautiful Sunday morning. We had decided to take a ride and do some photography. There had been a recent snowfall, so snow was an obvious subject, but I wanted something unique, something special.We headed West toward Lancaster, maybe farmhouses in the snow, I thought. Then it came to me. I wanted a bare tree in an open field with it’s elongated shadow coming towards me. I could see it in my head.I told my wife, who was driving, about the image in my mind. Now, where to find this perfect shot. I told her it had to be up high, for perspective, and the sun must be behind to cast the shadow towards me.We looked and drove and looked some more.

About mid afternoon, Arlene found a road with a little creek next to it. She said, “Let’s go this way!” She found a great covered bridge surrounded by fresh snow. I got out of the car and started to shoot. The photographs we OK, but nothing special, at least to my standards.

I walked onto the bridge looking for a unique perspective. I noticed holes in the bridges cover and decided to shoot through one at the creek below. Just as I pressed the camera against the hole, I heard the clackity, clack of horse hoofs. The Amish horse and buggy was approaching on the road in my frame. I couldn’t believe it, a great shot was born. (See it here, Through the Peephole)

I was so pleased, I ran back to the car and told my wife. It was a sign, I told her. When serendipitous stuff happens, and I get a shot as a result, it’s like hitting the lottery for me.

We ventured on. I still wanted the shot that was in my head.

We decided to get something to eat and stopped at a local diner in Ephrata (Akron Restaurant). My wife was ready to do other things than chauffeur me around to take pictures. I was going to give in and let her have the rest of the day. And then it happened. I went into the men’s room and there on the wall was a photograph. It was two bare trees, in the snow, with a wavy reflection in the foreground. The photo looked manipulated. The reflection wasn’t real, but that didn’t matter, it was a sign. I had to show Arlene… couldn’t bring her into the men’s room, so I took a picture with my iPhone to show her. 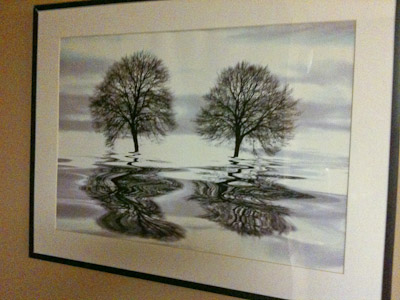 About an hour later, we came across a great shot of a tree back lit by the sun, with a long shadow. I got another great shot. This one included the sun, in frame, and a farmhouse in the distance. It’s a great shot. I was pleased. But even though it was starting to get late, I still wasn’t satisfied. (see it here, Long Shadow on a Winter Day)

We continued the quest. About a half hour later, I spotted a tree off the beaten path. I said, “Head to that tree!” When we got there, it was next to the creek. We stopped on a little bridge. The view was fantastic. And there was my shot. two trees reflected on the creek. Success.

I could have quit while I was a head. Afte rall, the two shots I had were very special, real keepers, but I persisted.